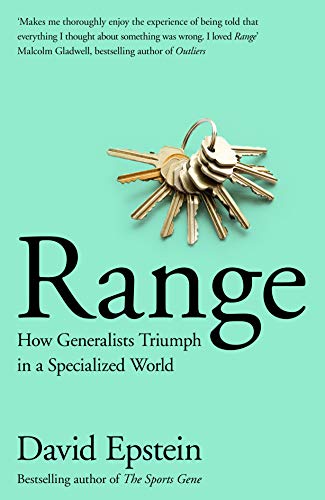 It's not often that I read a book that I enjoyed as much as this one.

I'll be the first to admit that I'm the kind of person who picks up a lot of things and drops most of them very quickly. I've failed numerous times and have a bad habit of diving really deeply into a subject before hopping off to the next thing with the attention span of a goldfish.

I struggled at school during my GCSE's and later my A-Levels. The idea that I had to make long-term decisions at 13 about what subjects I wanted to learn was one that boggled my mind. That only got worse at university and I dropped out of my first course, going on to eventually find something that held my interest.

The psychologists highlighted the variety of paths to excellence, but the most common was a sampling period, often lightly structured with some lessons and a breadth of instruments and activities, followed only later by a narrowing of focus, increased structure, and an explosion of practice volume.

In that sense the concept of self-exploration is one I've always found to be important. Crucial, even.

Learning stuff was less important than learning about oneself. Exploration is not just a whimsical luxury of education; it is a central benefit.

There's nothing like washing dishes for a living to focus your mind on what you don't want to do for the rest of your life.

I've been doing email marketing for the last 9 years, and, well, nothing's really materially changed in the industry in that time. Reading something like this is the right kind of kick up the arse to start learning new skills.

Switchers are winners. It seems to fly in the face of hoary adages about quitting, and of far newer concepts in modern psychology.

Change can be hard, but stagnation is worse. Read this book.