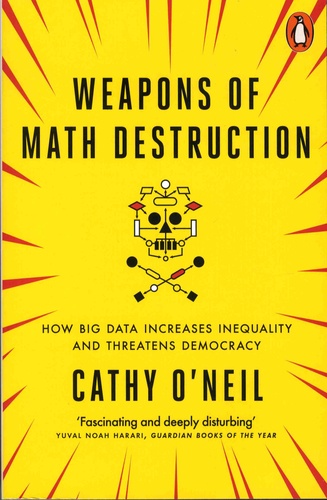 Algorithms rules our lives in a number of ways. Credit scores determine our ability to get financing, advertising is targeted at us to exploit our financial situations, the homeless are kept homeless, poor neighbourhoods are over-policed, teachers lose their jobs through opaque performance measurement systems and insurance increasingly tries to penetrate our private lives.

Cathy O'Neil's Weapons of Math Destruction is an expose of the harmful WMD's that affect us in our day-to-day life. Predominantly exploiting the poor and the disenfranchised, they're the worst examples of statistics and data-science used without thought about the people behind the numbers.

These algorithms serve only to reinforce poor decision making through bad statistics. Trustworthy Online Controlled Experiments by Kohavi et al raises the importance of what they call "guardrail metrics", something which is painfully absent from WMD's, either through design or lack of care, attention or experience by the developers of WMD's.

Forecasting is an inexact science, as anyone who paid attention to the recent US elections could tell you. But WMD's all attempt to produce forecasts, harming real people in the process.

Big Data processes codify the past. They do not invent the future. Doing that requires moral imagination, and that’s something only humans can provide. We have to explicitly embed better values into our algorithms, creating Big Data models that follow our ethical lead. Sometimes that will mean putting fairness ahead of profit.

A fantastic book, I only keep this one off my recommendations because you're likely to be familiar with the examples and therefore the problem if you've paid attention to data-related news over the last half decade.