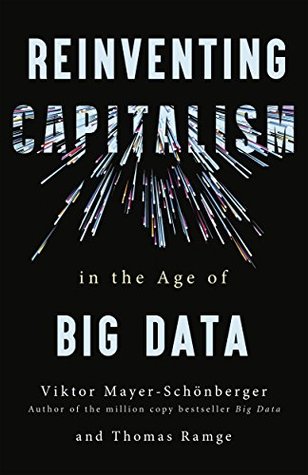 Reinventing Capitalism in the Age of Big Data looks at how the markets could work if they truly made use of data, and what that could mean for society.

Conventional markets have been highly useful, but they simply can’t compete with their data-driven kin. Data translates into too much of an improvement in transactions and efficiency. Data-rich markets finally deliver what markets, in theory, should always have been very good at—enabling optimal transactions—but because of informational constraints really weren’t.

The fundamental argument made by Reinventing Capitalism in the Age of Big Data is that current markets make poor use of data. If we truly want efficient markets we need to open up the data economy to a level never before seen.

We are already seeing businesses moving towards a data driven economy, such as in the widely reported story in which Japanese insurance firm Fukoku Mutual Life Insurance replaced 34 employees with IBM's Watson AI technology.

We are still in the early days of the data age. The rate at which workers are made redundant by data-driven automation is bound to accelerate in the coming years. If the link to labor share is real, this will prompt a further reduction in the share of income accruing to workers, while it enriches investors and banks.

Where Reinventing Capitalism in the Age of Big Data gets interesting is in its proposals on how to adequately tax businesses in this proposed new economy. Given the size and entrenchment of the tech giants, new methods of taxation must be used to prevent them from entirely controlling this new market.

Market concentration is on the rise, especially in the United States and the United Kingdom, and is becoming more prevalent in continental Europe in a wide variety of sectors and industries. Big companies are getting bigger, while (despite our seeming infatuation with entrepreneurship and start-ups) business dynamism, driven by innovative disruptors challenging entrenched incumbents, is ebbing, especially in the high-tech sectors.

Data collected by tech giants could be taxed in much the same way that their revenues currently are, with businesses forced to share some of their proprietary information with governments and their smaller competitors, giving them a chance to compete in this new data driven business.

If we accept that a general shift in the economy from reliance on money to reliance on rich data is underway, we ought to think more creatively about how to get companies to pay the taxes they owe. Governments might consider a partial payment of taxes in data rather than money. Car manufacturers might provide the public with anonymized sensor data from their cars; government could use it to identify particularly dangerous spots on the roads, thereby improving safety. A similar approach could improve food safety by using feedback data collected from farms and supermarkets. Feedback data from online learning platforms could help improve decision-making in the public-education sector, and decision-assistance data used for transaction matching could be reused in an early warning system that better predicts market bubbles.

If you can make it past the first chapter, which I found painfully tedious, you'll soon find a hugely compelling and interesting look at what our future may look like.